Two Ontario Realtors are embarrassed this weekend because of some inappropriate tweets. The offending tweets used the #AmberAlert hashtag along with promotional messages.

On Friday morning, an Amber Alert was issued after a 4-year-old Toronto girl went missing. News outlets began using the Amber Alert hashtag and it was soon trending on Twitter. 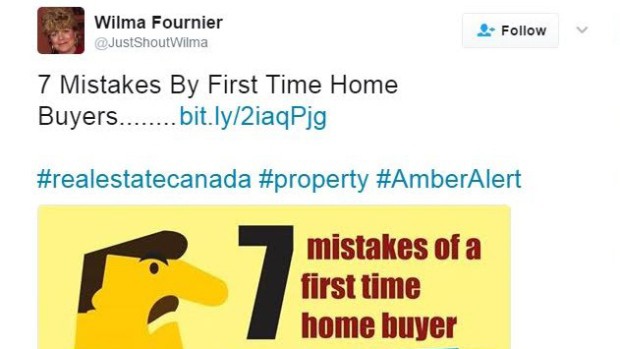 These tweets went out approximately two hours before the young child was found safe.

The Realtors quickly began receiving criticism for their decision to use the Amber Alert hashtag. The realtors deleted the tweets and blamed them on a third party who manages their social media.

Complaints to the Real Estate Council

The Real Estate Council of Ontario – which oversees about 75,000 real estate agents – received at least two complaints about the postings.

“From our perspective as the regulator, this is reprehensible opportunism on the part of these two registrants,” said Kelvin Kucey, the council’s deputy registrar of regulatory compliance. “We are pleased, to some degree, that they have seen the error in their judgment and they have withdrawn those statements on public media.”

The Real Estate Council’s investigation will look into how this happened. If the Realtors are found to be in the wrong, they could face a warning or a more severe fine.

While other brand’s attempts on capitalizing on trending hashtags have been embarrassing, Friday’s case was much more serious. One of the Realtor’s tweets advertised an open house. That could’ve been misinterpreted as the house being involved with the child’s disappearance.

The use of a third party to manage social media

The Realtors were using a marketing agency, Rayman Solutions, to manage their Twitter postings. This is pretty common as many Realtors operate out of small, local offices and don’t have the capacity to manage social media themselves.

It appears that Friday’s tweets went out without Hulst and Fournier seeing and approving the messages.

It’s not known whether the team at Rayman Solutions was aware of the implications of hijacking a hashtag. Or how serious it was to tag-jack one such as the Amber Albert.

When it comes to social media management, it’s not as simple as knowing the tools and being able to schedule posts. You need to understand the audiences on each platform and the nuances of each social network.

Getting help with your social media? Be sure your agency or partner knows your business wellClick To Tweet

These Realtors are learning how important it is to pick the right agency to represent them online.

On Friday afternoon, Royal LePage Canada announced that it planned to sever its relationship with Rayman Solutions:

“This was a lapse in judgment on the part of the brokerages’ third party marketing agency, who created and implemented the Twitter posts without their review or approval. This type of behaviour does not reflect the values and code of conduct of Royal LePage and we are deeply embarrassed and sorry for the offence this has caused.”

Are you looking for help with your business’ social media strategy? Let’s talk.